God says that the Land of Israel is His land, and the city of Jerusalem is His dwelling place.

“…I will enter into judgment against them (the nations)… for they scattered My people among the nations and divided up My land.”   Joel 3:1-2

Abraham had a son from his wife’s Egyptian maid Hagar – Ishmael. In Gen. 17:18,19 Abraham pleaded with God:

“Please let Ishmael be the son you promised,” God said: “NO, Sarah your wife shall bear you a son, and you shall call his name ISAAC; I will establish My covenant with him for an everlasting covenant, and with his descendants after him.”

Then God chose to continue the lineage with the younger of Isaac’s twins, JACOB. God changed Jacob’s man-given name to ISRAEL, which contains His name – El means God in Hebrew. God said to Jacob:

“And the land which I gave Abraham and Isaac, I also give to you, and I give this land to your descendants after you.“  Gen. 35:12

The nation of ISRAEL – the 12 children of Jacob/Israel became the 12 tribes of Israel who formed the Nation of Israel. God calls Israel His first-born (among nations). As a good father, God had to discipline His children in different ways but never stopped loving them. One of the punishments included being under foreign rule in their own land and expulsion from the land. The Jews went into exile twice, but God promised to gather them from all the nations where they were scattered and bring them back to the Land of Promise, the Land of Israel (formerly Canaan.)

In 70 AD, the Romans who occupied Judah destroyed the city of Jerusalem and the Jewish Holy Temple. Most of the Jews were taken into captivity and exiled. The Romans renamed the land Palestine, a name that remained through the different conquerors who came and went throughout the centuries, including the Christian crusaders and Muslim Arabs. All who lived in the land of Palestine were called Palestinians, both Jews, and Arabs.

Slowly the Jews began to come to Palestine as pioneers in the 19th century while it was under the Turkish Ottoman Empire for 400 years.

On November 17th, 1917, after winning WWI, United Kingdom of Britain Foreign Secretary and former Prime Minister, Arthur Balfour, made a formal declaration that a Jewish state should be established in Palestine.

On July 24th, 1922, Fifty-one member countries – the entire League of Nations (later to become the U.N.) – unanimously declared: “Whereas recognition has been given to the historical connection of the Jewish people with Palestine and to the grounds for reconstituting their national home in that country.”

They appointed Britain as the Mandatory for Palestine, with the explicit goal of “placing the country under such political, administrative and economic conditions as will secure the establishment of the Jewish national home.” 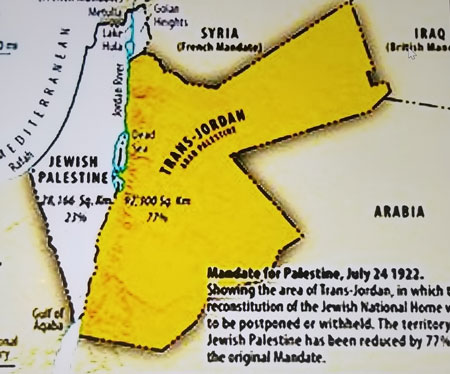 Political rights to self-determination for Arabs were guaranteed by the same League of Nations in four other mandates – in Lebanon and Syria (The French Mandate), Iraq, and later Trans-Jordan [The British Mandate]. Palestine was actually the ancient land of Israel.

More Jews returned to Palestine, bought land and built Jewish settlements, Kibbutzim, farms, and cities. A transformation started to happen as land that had lain desolate for 19 centuries started to bloom. Prophecies were fulfilled.

Ezekiel 36:8-11, ‘But you, O mountains of Israel, will produce branches and fruit for my people Israel, for they will soon come home. I am concerned for you and will look on you with favor; you will be plowed and sown, and I will multiply the number of people upon you, even the whole house of Israel. The towns will be inhabited and the ruins rebuilt. I will increase the number of men and animals upon you, and they will be fruitful and become numerous. I will settle people on you as in the past and will make you prosper more than before.’

World War II – 1930’s and 40’s – From the very beginning, the Arabs used violence to oppose the establishment of a Jewish nation in Palestine, and the British caved in to this violence and abandoned their international obligation to facilitate the establishment of a Jewish national home. The British didn’t abide by the League of Nation’s mandate, forgetting their promises of a Jewish homeland, but refused entry to Palestine to many Jewish refugees after 6 million Jews were murdered by the Nazis in WWII. In response to the 1936-1939 Arab revolt, Britain issued the White Paper which limited Jewish immigration to 75,000 for 5 years and ruled that further immigration was to be determined by the Arab majority. Restrictions were put on the rights of Jews to buy land from Arabs.

November 1947: The United Nations resolved that the Jews were to have their homeland in part of Palestine, while the Arabs will have the other part. Jerusalem would be an international city. While the Jews accepted this proposal, the Arabs rejected it. The 5 neighboring Arab nations declared war and attacked the newly established Jewish state from all sides. With little weaponry and a small army, Israel miraculously won the war and gained territory that included much of the land allotted to the Arabs. The borders were set, excluding the Old City of Jerusalem and Judea and Samaria remained in Jordanian hands. They renamed Judea and Samaria the ‘West Bank’. Jews fled the Old City. All Jews were denied access to the Old City and the Western Wall. Many holy places were desecrated.

In 1948, the British left and on the 14th of May 1948 Israel gained its independence and became the State of Israel. Israel made the western half of the city Jerusalem its capital.

1967: 19 years later, Israel won the 6 Day War against 3 of its enemy neighbors, and recaptured and Old city of Jerusalem and Judea and Samaria. New west Jerusalem and Old east Jerusalem were united under Israeli sovereignty as prophesied in Ps. 122:3.

“The LORD builds up Jerusalem; he gathers the exiles of Israel.” Psa. 147:2
“Jerusalem stands built up, a city that was joined together as one.” Psa. 122:3

“Surely I will gather the children of Israel from every side and bring them into their own land; and I will make them one nation in the land… of Israel…they shall no longer be two nations, nor shall they ever be divided into two kingdoms again.“

God is faithful to His word and His promises. Israeli soldiers stood with amazement in front of the Western Wall for the first time in their lives. The Israeli commander exclaimed: “The Temple Mount in our hands.” And there was much excitement in the land. But the Arabs and many Gentile nations rejected the outcome of a war they started, and they have continued to come against the nation of Israel.

Until 1948, all who lived in Palestine, were called Palestinians, Jews and Arabs. After winning the war of Independence in 1948, Israel changed the name of Palestine back to the original God-given name of Israel. All Jews in Israel are now called Israelis, but the Arabs kept the name

Palestinians. Now they are teaching in their schools that all of the Land of Israel is occupied Palestine, and that one day it will belong to them. 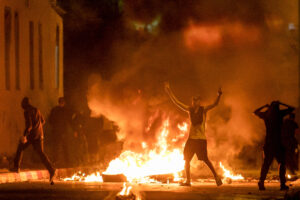 Moses led the Hebrew nation out of Egypt about 1,300 BC. Muhammad originated Islam about 600 AD, about 1,900 years later. The offspring of Jacob, the … END_OF_DOCUMENT_TOKEN_TO_BE_REPLACED