This weekend Hamas will be marking the one year anniversary of the start of The March of Return demonstrations that led to weekly tensions on the border fence with Israel. At first, their grandiose goal was to actually return to what they call “their” land of Palestine, encouraging the masses to force themselves through the fence into Israel. Loyal Hamas supporters have demonstrated tirelessly week after week over the past year along the security fence but were stopped each time by Israeli fire.

Their next goal was to lift the blockade on Gaza; they did not succeed in that either.

Now, a year later Hamas has not accomplished either goal. They succeeded, however, in sending incendiary kites and balloons tied with explosives to nearby Israeli fields and residential areas causing a lot of fires and devastation to Israeli crops and livestock along the border.

The blockade, combined with sanctions by the Palestinian Authority and Hamas using donations to build up their military capabilities and tunnels, has caused an economic crisis in Gaza with an unemployment rate above 50 percent.

Are the masses of Gaza’s poor citizens willing to be dragged into yet another year of those kinds of demonstrations?

Hamas can’t take this chance. Now their leaders have to make desperate moves to survive politically by dragging Israel into another round of fighting. As a notable accomplishment to show off their military capability, they fired two rockets to the Tel Aviv area on March 14th. Hamas announced it was “accidental”, but Israeli aircraft bombed 100 targets in Gaza in retaliation.

On the same day, hundreds of Gazans protested against Hamas and their dire conditions, to which Hamas responded with a violent crackdown, beating and arresting dozens of demonstrators.

Meanwhile, Israelis demanded from its leaders an end to the impossible situation of being constantly under threat from Hamas.
Netanyahu’s main election rival and former army chief, Benny Gantz, urged a “strict, stern and continuous policy against Hamas”. However, Hamas and the Israeli government are trying to avoid all-out war at all cost. 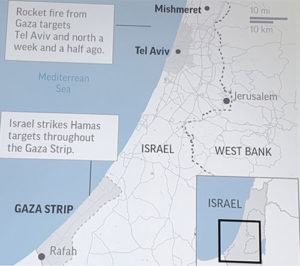 The latest round of violence began this week early Monday when seven Israelis, including a small child and an infant, were wounded as their house in a village northeast of Tel Aviv was completely demolished by a long-range rocket 120 kilometers (75 miles) fired by Hamas from Gaza, making it one of the deepest strikes ever carried out by Hamas. The family members said it was a miracle their lives were spared.

The Israeli military mobilized into the Gazan border two armor and infantry brigades and drafted some reserve forces before striking back at militant sites in Gaza. Israeli attacks caused panic to the Gazans. They stayed inside their homes since bomb shelters are only available to Hamas officials. (Before bombing, Israel warns Gazas citizens to stay away from Hamas buildings and facilities.) Hamas leaders went down to hide in bunkers.

Israeli air force bombings included a Hamas military intelligence headquarters building and the office of Hamas leader Ismail Haniyeh. Israeli naval ships targeted the Gaza seaport, while Israeli warplanes struck an underground facility east of Gaza City near the security fence. Gaza’s Health Ministry said seven Palestinians were wounded in the airstrikes. In retaliation, beginning at around 11:20pm Monday, a barrage of rockets was fired at the southern cities and villages through the night. “If (Israel’s) aggression continues, the resistance (Hamas) will not hesitate for a moment to fulfill its role,” the Palestinian Islamic Jihad said in a statement.

The back and forth attacks between Israel and Hamas, which resumed late Tuesday evening, continued into early Wednesday, with Israeli military striking several Hamas military positions in Gaza, while air-raid sirens sounded in southern Israeli communities, forcing Israelis to run into sheltered areas. Israeli Air Force retaliated shortly after with air strikes on Hamas facilities. Rockets fired early Wednesday morning at the southern city of Ashkelon were intercepted by the Iron Dome defense system.

Israel has already been in this situation.

There have been many rockets and the IDF (the Israeli army Israeli Defense Force) was engaged in many rounds of fighting — but the situation has remained the same. The results of yet another war, in the same format, will be the same. 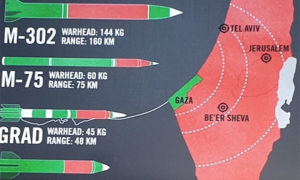 The blockade of Gaza that was supposed to bring Hamas to its knees, did not happen. Meanwhile the humanitarian conditions of the Gazan citizens have dramatically worsened, Hamas has been strengthened and has become even more sophisticated. Their rockets can now reach anywhere in central Israel and will probably soon be able to reach anywhere in Israel. Because of the humanitarian situation, Israel is allowing millions of dollars to pour into Gaza while Hamas is using the money and building materials to build up their military capabilities and building tunnels. Knowing Israel will avoid at all cost killing citizens and children, Hamas is hiding behind them in every war, making it impossible for Israel to destroy them.

So when Israel gets dragged into another round of fighting, Hamas survives but the people of Gaza suffer the consequences; homes are destroyed and women and children injured. Hamas is using it cynically to cause world opinion to turn against Israel.
The world may at first justify Israeli actions as a right to defend itself. But as more women and children are being killed, (if they don’t respond to Israel’s warning to evacuate) and when Israeli citizens are being saved by the Iron Dome protection, there will be an outcry that Israel is using unbalanced power against the poor Palestinians.

If the current round of hostilities ends up as an air and ground war, the results are predictable. At first, Western leaders may support Israel. However, after a few days, the television channels will be broadcasting images of the devastation in Gaza. Protesters against Israeli “war crimes” will flood the streets of major world cities. Anti-Israel organizations will use the opportunity to bash Israel. Leading world newspapers will print harsh condemnations of Israel. The leaders who supported Israel initially will give in to pressure and the UN Security Council will convene, there will be another ceasefire. After a short time, the violent protests will resume, incendiary balloons will be launched into Israel from Gaza and eventually, rockets will again be fired. A few months will pass, and an inquiry commission will publish its conclusions blaming Israel.

So what is the solution?

We need a miracle from God. We need wisdom for our leaders. We need a lot of prayers.

The test will be this weekend. The escalation can reach its peak on Saturday, as Gazan leaders announced the anniversary demonstration will take place on Saturday, and not on Friday as is customary. It will be combined with the reminder of Land Day which they mark every year on March 30, commemorating that day in 1976 that Israeli Arabs and Palestinians staged violent protests against the Israeli army and police over claims of Israeli appropriation of territory in which six unarmed Arabs were killed and around one hundred others were wounded.

Hamas is hoping 50,000 demonstrators will storm to the border fence, violence can flare up.

Pray that God gives Israel’s leaders wisdom and strategy to win this ongoing battle that seeks to destroy Israel and take over the land the God of Israel has given to His people. With elections coming up on April 9th more terror attacks are predicted both from Gaza and also from our northern border. Pray for the salvation of Israel – spiritually and also physically.

Moses led the Hebrew nation out of Egypt about 1,300 BC. Muhammad originated Islam about 600 AD, about 1,900 years later. The offspring of Jacob, the … END_OF_DOCUMENT_TOKEN_TO_BE_REPLACED