“For I gather all nations against Jerusalem to battle…Then shall the Lord go forth and fight against those nations, as when He fought in the day of battle.” Zech. 14:2a, 3

Iran is closing in, pressing to get closer to Israel’s borders.  Recent developments on Israel’s northern and southern borders seem to indicate Iran’s involvement.  The stability of Israel is tenuous. 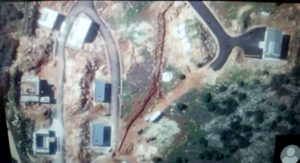 Site of the Israeli bombing in Syria

According to the Syrian claims, the Israeli air force launched a strike from Lebanese airspace on Syria’s Scientific Studies and Research Center near Masyaf in Hama province in the early hours of Thursday, November 2. (The center is responsible for the research and development of nuclear, biological, chemical and missile technology and weapons.) The strike resulted in the deaths of two Syrian soldiers and material damage. 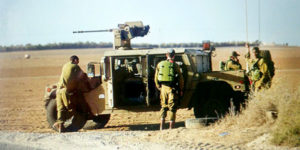 Israel, not admitting to launching the strike, announced that the Syrian military-scientific site produces precision missiles as well as chemical weapons and barrels of explosives that have killed thousands of Syrian civilians. However, Israeli officials have in the past admitted that Israel has repeatedly struck weapons shipments bound for Hezbollah, an ally of Syrian President Bashar Assad, without specifying which ones.
News expert, Ron Ben Yishai said that the site is using research and knowledge provided by North Korea and Iran. Ben Yishai and other Israeli news commentators warn that Iran is seeking to establish one of its planned weapons and precision missiles production factories to gain a foothold in Syria, and supplying Hezbollah with precision-guided missiles, in addition to the tens of thousands of ballistic missiles that Hezbollah already has. Only recently Israel warned that an expansion of the Iranian foothold on Syrian soil would not be tolerated by the Jewish state.
The Syrian army warned Israel of “serious consequences.” The Syrian army accused Israel of being in cahoots with ISIS. “The attack proves Israel is directly supporting ISIS and other terror organizations.” (How ridiculous!)

November 5: The resignation of Lebanon PM, Saed Hariri, is the latest Iran-generated shaking in the Middle East. Hariri claims there was a recent attempt to assassinate him so he fled to Saudi Arabia. (His father, Rafiq Hariri was killed by Hezbollah in 2005.)

Why is it important?

According to Hariri, Iran who is forcibly meddling in his country, has generated “disorder and destruction” in Lebanon and meddled in its internal affairs as well as in other Arab countries such as Syria, Iraq, Bahrain, and Yemen. Especially supporting and funding Hezbollah terror organization. Hariri claims that Iran’s arm is establishing a fact on the ground through the power of weapons. “They have built a state within a state,” he declared. Furthermore, Hariri states that Iran has been working to establish a military presence in Syria and now is trying to do the same in Lebanon.

Iran denied Hariri’s charges and said, “Hariri’s resignation was a US and Zionist plot against the Islamic Republic.”
Meanwhile, the future of Lebanon’s government remains cloudy.

Hamas’ tunnel network is a vast underground city with dozens of access points located throughout Gaza. Hamas uses these tunnels as weapons caches, bunkers, command centers and a concealed transportation artery for terrorists and weapons, including rocket launchers.
Some of these tunnels lead directly from Gaza into Israeli communities near the border, for the purpose of infiltrating, kidnapping and attacking Israeli civilians and soldiers. The residents of southern Israel live in constant fear knowing that, at any time, a terrorist could emerge from a tunnel near their home.
In 2014 Israel engaged in Operation Protective Edge with Hamas. The fighting lasted 50 days. The Israeli army destroyed 32 terror tunnels, 14 of them crossed into Israel. Unfortunately 64 Israelis, soldiers and civilians lost their lives. Two soldiers’ bodies are still being held by Hamas.
Hamas has resumed the digging of the tunnels, ironically with the concrete materials Israel is supplying for rebuilding the houses that were destroyed in the war.
Since the end of Operation Protective Edge, Israel has invested billions of shekels in the research and development of ways to detect and destroy terror tunnels. Now, a simple Israeli-made smart-sensor system proves to be the most effective solution to the threat.
On Monday it detected the exact outline of a terror tunnel! The tunnel was destroyed by explosion killing 12 terrorists – two Hamas and ten Islamic Jihad terrorists (who dug the tunnel.)
The IDF is making efforts not to divulge the technology it used in the operation against the terror tunnels, thus the claim of IDF Spokesman Brig. Gen. Ronen Manelis, “Only conventional measures were used. The secondary damage underground resulted in fatalities. There was no intention to target any specific individual. The operation took place in our territory.” This is a battle of the minds with Hamas, who is also investing in research and development for improving the system of digging the tunnels in order to overcome the advantage of the Israeli technology.
A spokesman for the Palestinian terrorist group called the incident a “clear declaration of war by Israel. We are examining all the options so as not to squander the possibility of responding to this aggression.”
Hamas, which controls the Gaza strip called the Israeli bombing of the tunnel “a desperate attempt to sabotage efforts to restore Palestinian unity and maintain the state of division.” and that “the Zionist enemy will pay for its crimes. We will not sit idly by.”

Israel’s enemies from the north and from the south
are tightening their cooperation. 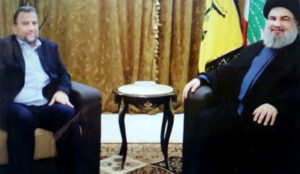 With the excuse of being freedom fighters of the resistance against “the Zionist enemy” Israel, needing to liberate the entire “occupied Palestine” since 1948, both the terrorist organizations of Hamas in the south and Hezbollah in the north, met together in Lebanon to join forces for this cause.
This meeting came a few months after Iran, Hezbollah’s main supporter, and Hamas agreed to restore diplomatic relations to the level at which they were before the Syrian civil war when the sides broke. In a recent phone call, Nasrallah, the leader of Hezbollah in Lebanon, stressed that Hezbollah “stands by the resistance movements in Palestine.”

We know that God is sovereign over All of these events that involve the enemies of Israel on the northern and southern borders. Behind them is Iran who is closing in and pressing in to get closer to Israel’s borders. He is Israel’s protector.
Please pray and stand with Israel as these events continue to rock our region. Pray for wisdom for the leaders, and most of all – for Israel’s salvation.

Moses led the Hebrew nation out of Egypt about 1,300 BC. Muhammad originated Islam about 600 AD, about 1,900 years later. The offspring of Jacob, the … END_OF_DOCUMENT_TOKEN_TO_BE_REPLACED