According to the Bible, the First Temple’s destruction began on the 7th of Av (2 Kings 25:8) and continued until the 10th (Jeremiah 52:12). According to the Talmud (Rabbinical Oral Law,) the actual destruction of the Temple began on the Ninth of Av, and the temple continued to burn all night and day throughout the Tenth of Av. Official Rabbinical Judaism combines the dates of the first and second temples destruction so as to observe both on the 9th of Av – Tisha B’Av.

Tisha B’Av marks the end of the three weeks called “between dire straits” and is regarded as the saddest day in the Jewish calendar.

This year Tisha B’Av falls on August 7th in the Gregorian calendar. Jews fast for about 25 hours, beginning just before sunset on the eve of Tisha B’Av and ending at nightfall the following day. Although the fast ends at nightfall, according to tradition the First Temple continued burning throughout the night and for most of the following day of the tenth of Av.

Depending on the piety of the different religious sects, in addition to fasting, other pleasurable activities are also forbidden, such as no washing or bathing, no application of creams or oils, and no marital relations.

This year Tisha B’Av falls on a Saturday, and since Jews are not supposed to fast or mourn on a Saturday, Tisha B’Av is being observed on Sunday and restrictions end Monday morning. Religious Jews refrain from involvement in activities that would be considered joyous until Monday morning, such as eating meat, drinking wine, and listening to music.

In Israel, all restaurants and places of entertainment are legally closed from sundown of Tisha B’Av until sundown the next day. Establishments that break the law are subject to fines. In the diaspora, however, secular Jews do not observe Tisha B’Av as in Israel, or as they do observe Yom Kippur.

On the 9th of Av, the following  passage of Isaiah 1:1-18 is being red in the synagogues:

The vision of Isaiah the son of Amoz, which he saw concerning Judah and Jerusalem in the days of Uzziah, Jotham, Ahaz, and Hezekiah, kings of Judah. Hear, O heavens, and give ear, O earth! For the Lord has spoken: “I have nourished and brought up children, and they have rebelled against Me…They have forsaken the Lord, They have provoked to anger The Holy One of Israel, They have turned away backward. Why should you be stricken again?…Your country is desolate, Your cities are burned with fire; Strangers devour your land in your presence; And it is desolate, as overthrown by strangers. So the daughter of Zion is left as a booth in a vineyard, As a hut in a garden of cucumbers, As a besieged city.”

Nevertheless, the Lord, the God of Israel has also promised to bring back His beloved people, the Jewish people from the diaspora, back to the land of Israel, the Land of Promise. And we are now witnessing the fulfillment of His promises. Israel is back physically. Now God wants to bring Israel back to Him spiritually, through faith in Messiah Yeshua. 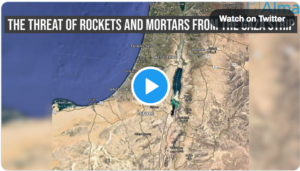 The Palestinian Islamic Jihad is a militant terrorist organization that operates mainly in the Gaza Strip where most of its military strength is located. The PIJ also operates terror cells in cities in Judea and Samaria, mainly in Jenin and Shechem (Nablus.) The PIJ has headquarters in Lebanon and Syria and is a proxy of […]

Moses led the Hebrew nation out of Egypt about 1,300 BC. Muhammad originated Islam about 600 AD, about 1,900 years later. The offspring of Jacob, the … END_OF_DOCUMENT_TOKEN_TO_BE_REPLACED